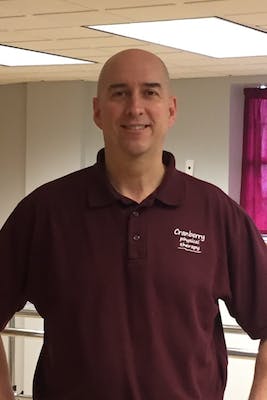 Mr. Reckless is a 1989 graduate from Ithaca College with a Bachelor's of Science degree in Physical Therapy. He began his professional career in Rochester, NY working with adults and children with developmental disabilities. In 1991 he relocated to Pittsburgh, PA to work at Harmarville Rehabilitation Hospital. He spent 22 ½ years at this facility working in all areas of physical rehabilitation. From 1991 to 1996 he focused on Orthopedics, Amputee rehab and Spinal cord injury rehab for inpatient rehabilitation. He started and led the Amputee support group from 1996 to 2014. In 1996 he joined the outpatient department and was the outpatient rehabilitation manager from 1998 to 2014. During this time he added a focus on neurological diagnosis of MS, Parkinson, CVA, TBI and Vestibular rehab in addition to providing aquatic, home based therapy and early intervention to pediatric clients. He has been a clinical advisory committee member for The National MS Society since 2002. Mr. Reckless has volunteered for various organizations and events including the ParaOlympics, Disabled Sports USA, Pittsburgh Marathon wheelchair division. In addition, Mr. Reckless has created educational videos for teaching amputee rehabilitation and has lectured at University of Pittsburgh, Slippery Rock University, Duquesne University and Chatham Colleges Physical Therapy programs for amputee and spinal cord injury rehabilitation over the course of his career. Mr. Reckless received special certification in LSVT BIG for Parkinson rehabilitation in 2013. In April of 2014, Mr. Reckless joined MRS Physical Therapy as facility director of the Bridgewater, PA location. He looks forward to delivering quality care to the residents of Beaver County. He resides in Cranberry Township with his wife and 4 children and enjoys his hobby of gardening.